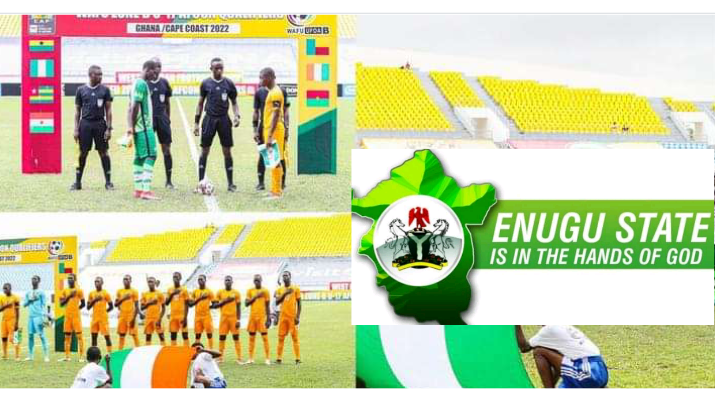 Football enthusiasts in Enugu on Tuesday hailed the Golden Eaglets of Nigeria for their 3-1 win against Baby Elephants of Cote Côte d’Ivoire at the ongoing WAFU B under 17 tournament in Ghana.

Reports that the win qualified the Golden Eaglets to the next year’s U-17 Africa Cup of Nations in Algeria.

Two well taken free-kicks from Emmanuel Michael in the first half and a second half header off Abdullahi Idris, ensured coach Nduka Ugbade side defeated Baby Elephants.

Some enthusiasts who spoke to our correspondent after the match hailed the players for their determination and zeal to do the nation proud.

Nobert Okolie the Rangers media officer said, for the players to come back from a goal down to win the match 3-1 is commendable and that showed they are worthy ambassadors.

“We are now in the final but the players should know that the assignment is not yet over untill they win the final.

“Though, we have qualified for the forthcoming AFCON under 17 but we need to cap up the good performance with a trophy.

Also, Ignatius Okpara, the former secretry of Sports Writers Assocation of Nigeria (SWAN), Enugu said the Golden Eagles should not soft peddle yet.

“Nigeria need to show their dominance at the cadet football in Africa, the ways they have done at the world stage by winning the ongoing qualifiers.

Okpara advised the players not to think that they had arrived as they still have a bigger mountain to climb at the final.

He also called on the coaches to go back to the drawing board to correct the lapses discovered at the semifinals to ensure they win the next match.

“I have watched them play and they are good to go and I believe that the players will up their game at the final.

The coach expressed dismay that national team matches are not been shown live or with commentary this day.