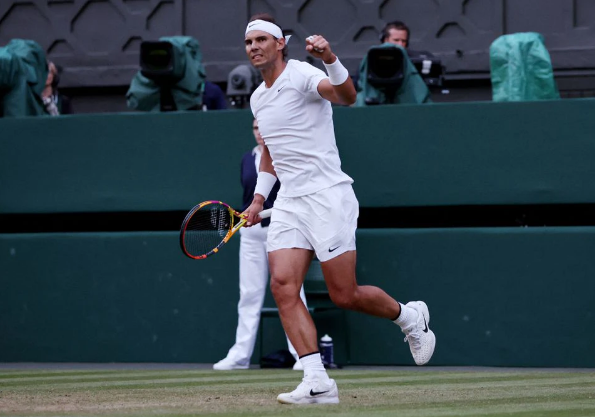 By olumide On Jul 5, 2022
0
Share
Second seed Rafael Nadal took another step forward in his bid for a rare calendar-year Grand Slam on Monday.
He booked his spot in the Wimbledon quarter-finals with a commanding 6-4 6-2 7-6(6) win against Dutchman Botic van de Zandschulp.
The All England Club, where the Spaniard has won two of his 22 majors, has been the least rewarding place for Nadal but he arrived this year, having won the Australian and French Open titles back-to-back for the first time in his career.
A third Wimbledon title and first since 2010 on the manicured lawns and a U.S. Open triumph would see the Mallorcan claim the calendar slam — a feat last achieved in 1969 by Australian great Rod Laver.
Nadal broke 21st-seeded Van de Zandschulp’s serve five times in the final Centre Court match on Monday, dominating the contest from start to finish to win in two hours 21 minutes.
Serving for the match at 5-3, the 36-year-old Spaniard was broken but then got the job done in the tiebreak. He will face American 11th seed Taylor Fritz for a place in Friday’s semi-finals.
0
Share FacebookTwitterGoogle+ReddItWhatsAppPinterestEmail
You might also like More from author