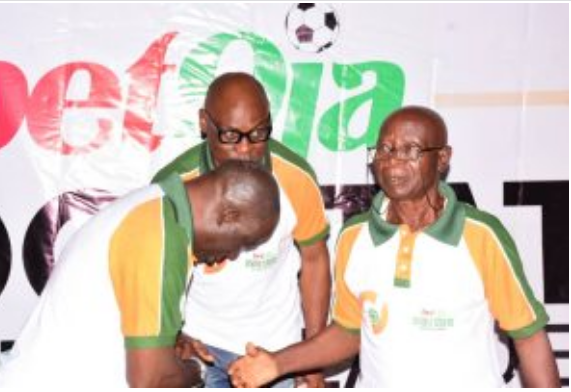 The Chairman of the organising Committee for the Bet9ja Ondo State Football League, Mr Yomi Seriki, says 70 teams have so far registered and will be participating in the maiden edition of the league across the state.

Seriki made the disclosure during the draws for the participating teams at the Ondo State Sports Complex, Akure, on Sunday.

According to him, the competition will be in the league format and will start on a zonal basis, with Northern Senatorial District kick-starting the league on Wednesday, Aug. 10 in Owo.

He assured the participating teams of level playing ground and fairness, noting
that the committee would run a league that the teams, sponsors and stakeholders would be proud of.

“Basically, we are going to play the league base on zones or senatorial districts and the major reason for this is because of the cost.

“We want the league to identify and develop talents, and we know what the economic situation of the country is now.

“We don’t want to put too much pressure on the teams, because when a team starts travelling from Akoko to Ilaje, you know the cost.

“Apart from that, we want you to play within your own environment without incurring so much cost and it’s not going to be on knock out basis, it is going to be on league format,” he said.

Seriki urged club owners to always notify the committee of any lapses, rather than dragging the name of the sponsors to the social media in a negative way.

He added that other states were in the  third, fourth season of the league and urged the participating clubs to make it more memorable for all to see.

Also, the Chairman of Ondo State Football Association, Otunba Dele Ajayi, said he was happy the state league is back and clubs in the state will have pool of talents to select from.

Ajayi, who was represented by the Vice Chairman, Mr Aderemi Adetula, urged the clubs to show spirit of sportsmanship and advised club owners to guide their players on proper conduct.

Also speaking, the President of Adeleke FC of Akure, Alhaji Dada Adeleke Jimoh, said he was impressed with the coordination, saying it was first of it’s kind since he created his club in 2019.