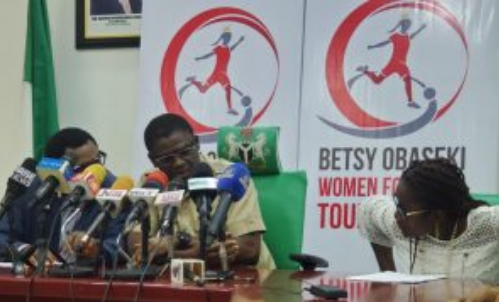 The Board of Trustees (BoT) of the second edition of the Betsey Obaseki Women Football Tournament on Wednesday announced a “sumptuous” cash prize of N5 million for winners.

The BoT’s Vice Chairman and Deputy Governor of Edo, Mr Philip Shaibu, announced the cash prize at a news conference on Wednesday in Benin.

Shaibu said the invitional event had been scheduled to hold between Sept. 7 and 17 in Benin.

He said the tournament would feature 10 clubs in the Nigerian Women Football League (NWFL) Premiership and two other local clubs in the state.

Others are Rivers Angels, Sunshine Queens, Naija Ratels and Royals Queens, while Fortress Ladies FC and Brave Heart FC will join as local best to make a list of 12 teams.

The BoT  which announced the cash prize for the winners, said the winner would pocket N3 million while second and third runners up would go home with N1.5 million and N750,000 respectively.

Shaibu added, however, that other participating teams would get N500,000 each as a consolation prize.

According to Shaibu, matches will hold across four centres namely, Samuel Ogbemudia Stadium, University of Benin Sports Complex and two state-owned mini stadia at the School of Health Technology and Western Boys Secondary School, both in Benin.

The deputy governor explained that while the draw for the competition had been scheduled for Aug. 24, the 36 states governors’ wives were expected to grace the closing ceremony.

He said the event had come to stay as a pre-season event for women professional football clubs in the country, with the organiser of the league assenting to it.

“This year’s event is going to be interesting. The theme for the 2021 event was used to promote girl child education; this year’s theme will be to campaign against illicit drugs and human trafficking.

“The implication is that the event has come to stay in Nigeria. Thanks to the state governor’s wife, Mrs Obaseki, for keeping touch to make it an annual and pre-season event for women football premiership.

“We also thank the state Sports Commission for accommodating it in its calendar despite being driven by the private sector.

“To institutionalise it, we now have a Board of Trustees for the tournament, in which the First Lady (governor’s wife) is the chairman and I am the vice-chairman; this is to ensure that the event outlives this government,” he said.

The deputy governor, who was assisted at the briefing by other members of the board, said the outstanding performances of Nigerian women at the Commonwealth Games had justified the renewed investment in women sporting events.