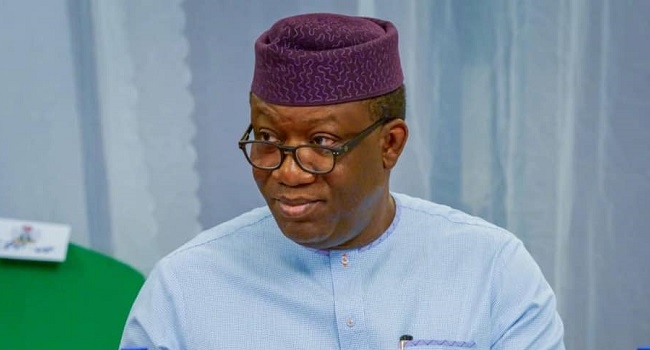 Gov. Kayode Fayemi of Ekiti, has advocated better welfare package for the personnel of the Nigeria Police Force to motivate them for quality service delivery.

Fayemi, who was represented by his Deputy, Mr Bisi Egbeyemi, made the call when he received executive members of the Board of Trustees of the Nigeria Police Trust Fund on a courtesy visit in on Thursday in Ado-Ekiti.

He said the welfare of officers and men of the Nigeria Police should be accorded priority because of their importance in maintaining security of lives and property.

The governor identified areas that the Police need motivation to include better salary and allowances, training, housing scheme and insurance.
He also said that they need state-of-the-art equipment to tackle insecurity and all forms of crimes and criminality across the country.
Fayemi, who is also the Chairman of the Nigeria Governors’ Forum (NGF), said efforts should be made by stakeholders to support the Police to function optimally.
He said: “We appreciate the laudable roles of the Police Trust Fund and we will support it in giving welfare to the personnel.
”We are going to look into you demands because we recognize the importance of the Police.”
The governor assured that his administration would continue to support the state police command within the limited resources  of the state government.
He commended the Police for displaying high level of professionalism and efficiency during the June 18 governorship election in the state.
Fayemi charged corporate organisations to support the Police Trust Fund to deliver on its mandate to assist the Police in the areas of better welfare, training and retooling.
Speaking earlier, leader of the delegation and member, Board of Trustees, Police Trust Fund, Dr Mike Adebiyi commended the Ekiti Government for its sustained support to the Police.
Adebiyi disclosed that the Police Trust Fund was established by President Muhammadu Buhari, to mobilise funds in order to improve the funding of the Police.
He said that the board deemed it fit to go to the field to see the challenges being faced by the personnel and to explore ways to ameliorate the situation.
Adebiyi thanked the Fayemi-led administration for its support to the police and described the security situation in the state as commendable.

He, therefore, urged  Fayemi to use his position as the NGF Chairman to assist the Police Trust Fund to access its funds held up by legal issues to assist the Force to achieve its mandate.