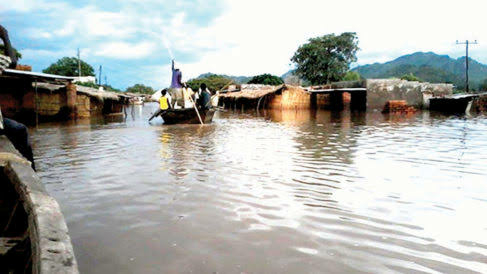 The Jigawa State Emergency Management Agency (SEMA) said that 50 people, including a newborn, were killed in building collapse due to heavy downpours in different parts of the state.

The tragedy occurred across the state since the beginning of the rainy season.

Speaking with newsmen, the Executive Secretary of the agency, Alhaji Yusuf Sani stated that several houses were either damaged or destroyed, rendering several families homeless.

Sani said the displaced persons were currently taking refuge in 11 temporary camps, while others stayed with their relatives, as the agency was making efforts to open camps to accommodate the victims.

He added that the agency had been providing the victims, including those staying with their relatives, with items and other basic needs.

According to him, the worst hit areas are Kafinhausa and Balangu villages, all in Kafinhausa Local Government Area of the state.

“He said in Kafinhausa, six people died, 68 hospitalised and 1,436 lost thier houses, while in Balangu four people died and 238 lost their houses.

He said the agency got information of the death of seven people from same family including a newborn baby in a building collapse on Sunday in Kafinhausa.

“From the report we have, if you combine the number is getting to 50 since the commencement of the rainy season,” the executive secretary said.

Sani said he could not immediately give the exact number of communities and people affected by the disaster in the state because personnel of the agency were still assessing the level of damage and compiling list of the victims.

“There is a camp around Kafinhausa that accommodates over 1,000 displaced persons.

“Some have over 300, so I cannot tell you the exact number because we are still taking people there,” Sani said.

He, however, commended the National Emergency Management Agency (NEMA) for its prompt response to the disaster by bringing succour to the victims.

” Maybe by tomorrow or so I can tell you the exact number of people affected.

“And as I was telling you, the disaster occurred in all the 27 LGAs because it’s a matter of rainfall and we had rain for good three days in Jigawa nonstop. So all the 27 LGAs are affected.

“So our personnel are already in the remaining 21 LGAs taking assessment and as soon as we receive the report, we will forward it to NEMA and donor Organisations for intervention,” the executive secretary added.