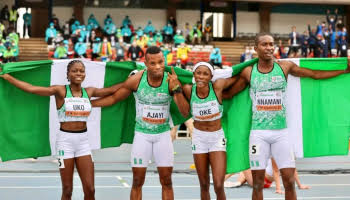 Chief Executive Officer (CEO) of, the Ghana Athletics Association, Mr Bawah Fuseini, said this in an interview with the News Agency of Nigeria (NAN) in Benin.

Fuseini said that the athletes were competing in four events at the trials for the international events that would hold between July and August.

According to him, nine of the athletes have so far qualified for the world championship.

Fuseini, also the CEO for Region II (West Africa), Confederation of African Athletics, expressed delight with the performance of the Ghanaian team so far.

“So far so good, we placed second in men and third in women. It is quite good for us. We hope to do better, but these positions are quite good.

For the championship in Oregon, the Ghanaian athletic official said that the country had qualified in men’s 100 metres and 200 metres; men’s 4×100 metres and long jump for women.

For the Commonwealth Games, he said that the country had qualified for men’s 100 metres and 200 metres as well as 4×100 metres for men and women, with high jump and long jump women.

“We have set our own target to our own standard in Ghana because games are never an open event that they give quota.

“We have set our own standard and we have our own 14 athletes qualifying by Ghanaian standard,” he said.

On the funding of athletics by the Ghanaian government, the official said that the situation in Nigeria was not different from other West African countries where the chunk of resources meant for sports were going into football.

“Football takes 98 per cent of the resources from the government and Ghana is no exception.

“When there is a football match, be rest assured that if you go to the ministry, you won’t get a cedi.

“They will tell you ‘wait until football ends. If there is a left over, then we will look for you.

“It is everywhere in West Africa, and Ghana is not different,” said Fuseini.

He, however, stated that the association was pushing an agenda that it should not be football alone that could make the country’s name go far, but athletics also.

Fuesini said that the success of the agenda would depend on the performances of the athletics in international tournaments.

2022 Aiteo Cup: Bayelsa Queens progress to round of 16 without kicking a ball